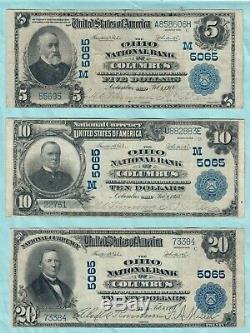 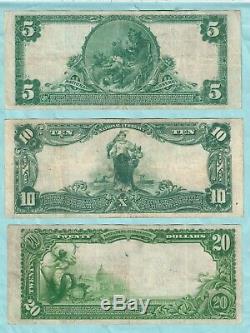 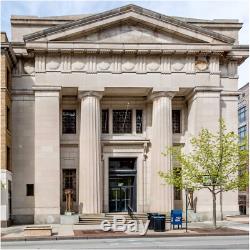 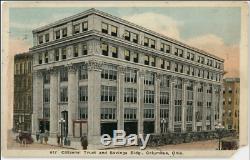 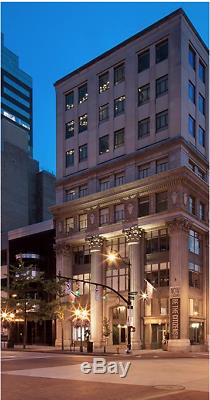 Before you lies an evenly graded, matched set of The Ohio National Bank of Columbus , Columbus' 11th chartered National bank: Charter #5065. Originally chartered as a state bank, May 2nd, 1888, as the Ohio Savings Bank of Columbus. It was Federally chartered by the Comptroller of US Currency in 1897. By 1914, they built their first building of neo-classical architecture which still stands at 167 S. High St where it made its new head-quarters.

National City Corp was a very large bank holding company in Cleveland Ohio. By 2008 huge losses occurred amounting to almost three-fourths of a billion dollars. It was then acquired by the Pittsburg PNC banking organization. A photo of the original Ohio Natonal Bank Bldg, 167 S.

High St, built in 1916 accompany this site. The second home, acquired in 1921, was a much larger building, It was the former Citizens Trust & Savings Bank at 51 N.

Photos of that building also accompany this site. This set is the 1902 Plain Back series. All of these notes are new to the census. The serial numbers of these notes are neither listed in Track & Price, nor the National Bank Note Census as of the date of this listing 3 May 2020. Because they are not listed, there is no census listing on the grading. Between 25 and 30, but by no means guaranteed to be graded as such by a third party grader. There are no pinholes nor tears in any of these notes, just nice even wear of quite respectable quality. There are a total of approximately 155 large size notes known on this bank.

Of the total, about 110 are of the 1902 series. Stats of known 1902 PB population: Track & Price Nat Bank Note Census Sellers count. By using several different parameters, it is possible to know the bracketed date when each of these notes was issued. Krumm as cashier and F. The inception of these two officers began September 15th, 1915.

Since It has the treasury serial number as well, it must before September of 1925. Therefore the issuing date was between September, 1915 to September 1925, a span of only 10 years.

That short 8 month range. There is a maximum of only 27 sets possible. If you have interest in single notes of this series, kindly inquire. Special double glazed framing is available at an extra charge. Offers of half price and below market are respectfully declined.

So, please, consider carefully your reasonable offer. All scans of these notes are made without photoshop or light adjustment.

Actually notes appear brighter (whiter fields) than shown in these scans. You WILL be pleased with the quality of these notes.

The item "Ohio National Bank, Columbus OH 1902PB SET $5, $10 & $20 banknotes Nat'l Currency" is in sale since Sunday, May 3, 2020. This item is in the category "Coins & Paper Money\Paper Money\ US\National Banknotes". The seller is "macuquina" and is located in Miami, Florida. This item can be shipped to United States.